HN-081603130000
£34.99
Your text will be printed exactly as you have entered it, so please double check spelling, punctuation and capitalisation. Not all accents and symbols can be printed. No Emojis please
This beautiful Moana collection book includes six stories: ‘Wave Rider’, ‘A Pig Named Pua’, ‘Pua and Heihei’, ‘Misadventures of Heihei’, ‘Waiting for Moana’ and ‘Becoming Shiny’. After Moana was released in cinemas in 2016, it quickly became a massive hit. The character of Moana is an inspiration to young girls on a universal scale: she is brave, determined, strong, and independent.

This stunning edition will glow with the recipient’s name embossed on the front and even includes an introduction story where they will feature!

There is also an option for a gift box.
Gifts You Viewed
Customers Also Liked 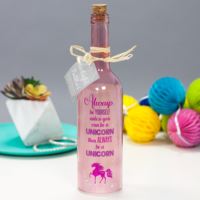